COPENHAGEN: Croatia punched above their weight to finish as the 2018 World Cup runners-up but a last-16 exit at Euro 2020 after a 5-3 defeat by Spain in an absorbing clash suggests they must rebuild after patchy performances throughout the tournament.

Following a 1-0 defeat by England and a scrappy 1-1 draw with the Czech Republic, the Croatians advanced to the knockout stage with a 3-1 win over Scotland at Hampden Park and it turned out to be their brightest moment.

Having been gifted the lead against the Spaniards by a bizarre own goal, Croatia fought back valiantly from 3-1 down with two late goals to force extra time and then ran out of steam against their more resourceful rivals.

Croatia had suffered a major blow prior to the clash when Ivan Perisic, their top performer in the group matches, was sidelined after testing positive for Covid-19.

But many of the ingredients that catapulted Croatia to their impressive World Cup run in Russia were missing in the Euro 2020, not least some key players who had hung up their international boots.

Ivan Rakitic left a gaping hole in the centre of midfield and Croatia’s 35-year-old captain Luka Modric, although still a class act after nine seasons at Real Madrid, was often unable to pull the strings.

Rebic, one of Croatia’s driving forces in Russia, had a forgettable Euro 2020 as did striker Bruno Petkovic who was designated to replace Mandzukic but never looked like living up to expectations.

Dalic tinkered as he looked unsure who his best starting eleven were or what the preferred strategy should be, often lacking a clear game plan with late substitutes Mislav Orsic and Mario Pasalic forcing the brief comeback against Spain.The coach argued that strength-sapping trips to London and Glasgow from Croatia’s Rovinj base camp on their Adriatic coast for each of the three group matches had put them at a disadvantage.

Croatia looked disjointed for much of the campaign, fuelling rumours there was a rift between the senior players, nicknamed “The Senators” by Croatian media, and their understudies.

Cracks in the armour appeared in a shock 1-0 World Cup qualifying defeat at neighbours Slovenia in March and subsequent wins over Cyprus and Malta did little to reassure the fans and pundits that Croatia were heading for a fruitful Euro 2020.

Having bowed out of the tournament, Croatia now face the task of qualifying for the 2022 World Cup in Qatar while introducing new recruits to avoid falling into the doldrums. — Reuters 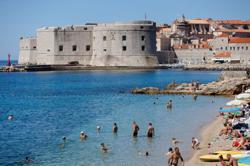 Soccer-Barcelona have squad to fight for the title, says Roberto
Soccer-Ten-man Barca held by Cadiz as De Jong and Koeman see red
Soccer-Roma to challenge Pellegrini red card ahead of derby - Mourinho
Soccer-Abraham strikes to earn Roma narrow win over Udinese
Soccer-Rooney vows to stay at Derby despite club entering administration
Soccer-Top dogs Napoli crush Sampdoria to continue perfect start
Soccer-Mexican Federation, 17 clubs handed fines over female salaries, team moves
Soccer-Liverpool's Alexander-Arnold and Firmino set to return against Brentford
Kipre’s ton of faith
Women want to be in a league of their own