(Reuters) - Borys Tashchy and Lim Sang-hyub were on target as three-times continental champions Pohang Steelers kicked off their 2021 Asian Champions League campaign with a 2-0 win over Thailand's Ratchburi in Bangkok on Tuesday.

The South Koreans, who last won the title in 2009, took the three points in their Group G opener at the Rajamangala Stadium before Nagoya Grampus picked up a 1-0 victory over Johor Darul Ta'zim from Malaysia.

Hiroyuki Abe's close-range finish in the 60th minute earned the Japanese side their win, although the midfielder's strike angered JDT defence who claimed he was offside.

Tashchy had earlier given Pohang the lead in the 11th minute when he beat two Ratchburi defenders to head home Manuel Palacios' cross from the right.

Kim Gi-dong's side had to wait until nine minutes from time before confirming their win when Lim struck, the winger stepping in from the right to smash his effort beyond the outstretched arms of goalkeeper Kampol Pathomattakul.

Teams in the eastern half of the continent will be playing the group phase of the Asian Champions League in centralised hubs in Thailand and Uzbekistan due to the ongoing impact of the coronavirus pandemic.

The winners of each of the five groups plus the three best runners-up will advance to the last 16, where they will join the eight qualifiers from west Asia, who completed the opening phase of the competition in April.

The knockout rounds are scheduled to be played in September with the final slated for late November. 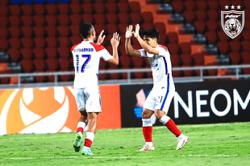