MUNICH, Germany (Reuters) -Four German players nursing injuries from their 4-2 victory over Portugal skipped training on Monday, the team said, with attacking midfielder Thomas Mueller's availability in doubt for their next Euro 2020 game against Hungary.

Mueller, recalled for the tournament after more than two years out of the team, suffered a capsule injury in his right knee towards the end of Saturday's Group F win over Portugal as he attempted to clear a ball.

Defenders Mats Hummels and Lukas Halstenberg, who came on as a substitute, as well as midfielder Ilkay Gundogan, were also missing from training at their Herzogenaurach base north of Munich.

"With Mueller it is a decision that will be taken day by day. I cannot answer that today," team spokesman Jens Grittner told a news conference. Prospects for the other three to be fit for Wednesday's final group game against Hungary were also unclear.

Hummels was nursing a knee inflammation while Gundogan and Halstenberg had muscle injuries.

Germany have three points, the same as Portugal and one behind group leaders France.

They will advance with a victory over Hungary but could also qualify with a draw if France do not lose their game against the Portuguese. The Hungarians, in last place with one point, need to win to have any chance of progressing. 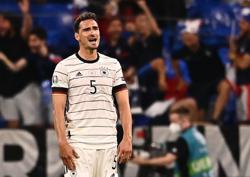