(Reuters) - Former Nigeria national team coach Samson Siasia, who was banned from the game for life for match fixing by world governing body FIFA, has had his sanction reduced to five years, the Court of Arbitration for Sport (CAS) said on Monday.

FIFA had said in 2019 that Siasia was "guilty of having accepted that he would receive bribes in relation to the manipulation of matches in violation of the FIFA Code of Ethics" and also fined 50,000 Swiss francs ($54,000).

However, CAS said the imposition of a life ban was "disproportionate for a first offence which was committed passively and which had not had an adverse or immediate effect on football stakeholders" while the fine was also set aside.

"The panel acknowledged the need for sanctions to be sufficiently high enough to eradicate bribery and especially match fixing in football," the CAS said.

"However, the panel considered in the particular circumstances of this matter that it would be inappropriate and excessive to impose a financial sanction in addition to the five-year ban since the ban sanction already incorporated a financial punishment in eliminating football as a source of revenue for Mr Siasia."

Siasia, 53, played as a striker for the Nigeria national team and later coached various national youth sides before a spell as senior coach in 2016. 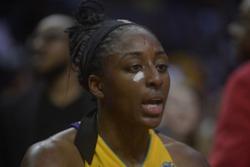