A Dutch soccer fan hangs a flag at the Marktweg that is decorated in orange for the Euro 2020 football championships, in The Hague, Netherlands June 19, 2021. Picture taken June 19, 2021. REUTERS/Piroschka van de Wouw

THE HAGUE (Reuters) - Streets across the Netherlands traditionally turn orange every time the Dutch soccer team has the slightest chance of winning something big, but this year one street beats them all.

With the Dutch playing their first championship since the 2014 World Cup, the people of the Marktweg in The Hague decided to go for an "extreme" makeover to mark the national team's comeback at the international stage at Euro 2020, resident Danny van Dijk told Reuters.

Over 30 km (almost 20 miles) of flags and banners have been used to cover the roughly 750 metres (820 yards) long street in a sea of orange in support of the national team.

All houses on the street have been wrapped in orange plastic sheets and red-white-blue Dutch flags, with slogans painted all over, while thousands of little orange flags span the whole length of the road.

"We had to wait seven years, so now decided to go for a big bang", Van Dijk said.

Work on the orange frenzy started well over a month ago, as dozens of residents teamed up to get the job done, with many of them taking days off from work to help and all residents chipping in to cover the costs, Van Dijk said.

"We have been working here for about six weeks and the costs, I hardly dare to tell you, but that is really thousands of euros. It must have been around 10,000 euros", 37-year-old resident Raymond Zwennes said.

The work has not gone unnoticed as the street last week even welcomed Dutch King Willem-Alexander, a fellow The Hague resident and football enthusiast, who drew a large crowd as he admired the decorations a few hours before the Dutch played Austria in Amsterdam.

With the Dutch team already through to the second round, the street's residents can now simply sit back and enjoy the games, and Van Dijk feels confident he doesn't have to worry about tearing everything down for a while.

"I have a very strange premonition, people think I'm crazy, but my gut feeling is we are going to be champions." 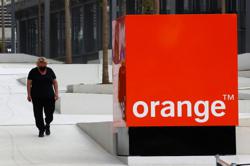