(Reuters) - Former England international Ashley Young has joined Aston Villa on a free transfer from Inter Milan, returning to the club a decade after he left for Manchester United, the Premier League side announced on Thursday.

Young, 35, has signed a one-year contract with Villa after helping Inter win the Serie A title under Antonio Conte last season.

"Ashley brings with him a wealth of experience of top-level football both at club and international level and he is joining having just won a league championship in Italy," Villa head coach Dean Smith said in a statement.

"He is a player who can play in a number of positions and, having spoken to him at length, I know he is determined to make a real impact with us this season." 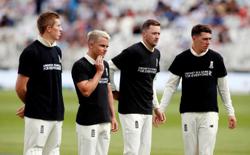