Soccer-Austria's Arnautovic suspended for one game for goal celebration

(Reuters) - Austria will be without forward Marko Arnautovic for Thursday's Euro 2020 Group C match against the Netherlands after he was handed a one-match ban by UEFA.

An investigation was opened by UEFA after Arnautovic's angry goal celebration in Austria's opening win over North Macedonia after coming on as a substitute on Sunday.

Arnautovic, who has Serbian background, apologised on Monday for his reaction towards North Macedonia fans but denied he had used racist language towards them.

The UEFA Appeals Body said on Wednesday it had suspended Arnautovic for one game for "insulting" another player.

Serbia does not recognise the independence of its former province Kosovo, while there is historic tension between Serbia and North Macedonia. 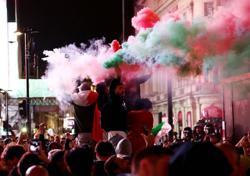