Luqman Hakim Shamsuddin stretches with his teammates after training. - Photo by FAM

PETALING JAYA: Losing in your first competitive debut can be demoralising but young striker Luqman Hakim Shamsuddin is taking it in a positive spirit.

The 18-year-old came on in the 62nd minute as a substitute for winger Safawi Rasid against the United Arab Emirates but he couldn’t do much as their strong opponents pulled off a superb 4-0 win in the World Cup 2022-Asian Cup 2023 second-round qualifier in Dubai on Friday.

He got his first international cap when Harimau Malaya were defeated 0-2 by Bahrain in a friendly.

Though his first two appearances have ended in defeats, Luqman said the team had learnt a valuable lesson and would bounce back in the next two Group G ties against Vietnam on June 11 and Thailand on June 15.

“We’ve learnt our lessons. When we take on Vietnam, we will play more courageously. This is a solid team and we have what it takes to qualify for the Asian Cup and the third round qualifier,” said the KV Kortrijk striker.

“When I came on as a substitute, I didn’t feel nervous because I wanted to be on the pitch and give my all. However, we faced a side that are ranked higher than us, so it was a different experience.

“I hope I can have more of this experience in these qualifiers.

“In terms of my own performance, it was satisfactory, but more can be done. I will surely work on my weaknesses to be a better international player.”

Luqman said he would fight for a first XI spot for the next game but, with just a few days left, he knows it will be a tough call for coach Tan Cheng Hoe.

“It all depends on coach Cheng Hoe. We just have to be prepared before the game. If given a chance, I will justify the faith.”

When asked if he preferred to play alongside Syafiq Ahmad or Guilherme De Paula up front, Luqman said it was all about team effort.

“We are one team. We lose and win together. I don’t feel it’s right to say who can play and can’t. We just let the coach choose the combinations.”

The Kelantanese boy has been touted as the rising star of Malaysian football, but it looks like he has to mature quickly and gel with the team to do well in the qualifiers.

And he seems to be on the right track. 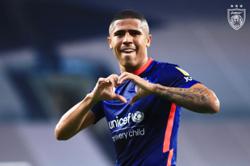