Soccer-No goal, but Benzema shines in France's 3-0 win against Wales 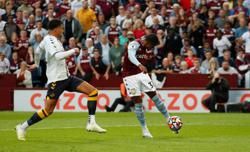 NICE, France (Reuters) -Karim Benzema missed a penalty and hit the post but delivered a fine performance in his France comeback as the world champions beat 10-man Wales 3-0 in a Euro 2020 warm-up game on Wednesday.

The Real Madrid striker, back in the squad after a hiatus of more than five years following a row with coach Didier Deschamps, helped his team mates shine with Kylian Mbappe, Antoine Griezmann and Ousmane Dembele finding the back of the net.

Wales threatened early on but had their wings clipped when Neco Williams was shown a straight red card for handling the ball from a Benzema attempt, which led to the forward missing a penalty in the 27th minute.

France play Bulgaria next Tuesday before starting their Euro 2020 campaign against Germany in Group F, where they will also face Hungary and defending champions Portugal.

Wales were drawn in Group A with Switzerland, Turkey and Italy.

"I had good sensations after a week of hard physical work and a long club season," said Benzema.

"I felt good throughout the game, it's a good sign. We still have time to fine-tune but what mattered tonight is that we tried things and that we won."

Deschamps was satisfied with Benzema's display.

"He was unlucky but you can see how gifted he is technically. A goal would have capped it off but he's saving the goals for later."

Benzema signalled his return with a header from Paul Pogba's cross on four minutes, while Wales's Daniel James forced Hugo Lloris to make a great save from an angled shot.

Danny Ward made a spectacular stop from a Pogba header but Benzema had followed up and Williams used his hand to deflect away the striker's attempt.

Following a VAR review, France were awarded a penalty and Williams was sent off, only for Benzema to see his spot kick saved by Ward, meaning Les Bleus have missed five of their last eight penalties.

Ward was at it again to deny Antoine Griezmann, but the ball fell into the path of Mbappe, who stabbed it home for his 17th France goal in the 34th minute.

Griezmann doubled the advantage three minutes into the second half with a superb curled effort after being set up by Benzema's back heel.

Benzema had another chance on 79 minutes as his half-volley hit the post before falling to Dembele, who scored France's third with a cool finish. 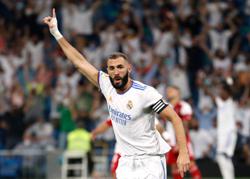 Soccer-Zapata gets Atalanta back to winning ways at Salernitana
Soccer-Now I feel like a Villa player, says Bailey after sparkling cameo
Soccer-No striker, no problem, says Guardiola after Saints stalemate
Soccer-Struggling Leipzig rescue draw at Cologne with second-half equaliser
Soccer-Champions Inter back on top after hitting Bologna for six
Soccer-Villa end Everton's unbeaten start with 3-0 win
Soccer-Liverpool go top with win over Palace as City held by Saints
Soccer-Derby boss Rooney says he learned of administration decision from TV
Soccer-Lens end 15-year wait to beat Lille in derby despite crowd trouble
Soccer-Record-breaker Mane's return to form a boost for Liverpool