Soccer-Pioli says losing top-four would be disappointment, not failure for Milan 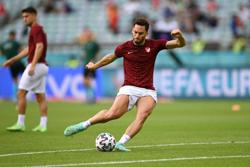 (Reuters) - AC Milan coach Stefano Pioli insisted that losing a top-four place on the final day of the Serie A season would not be a failure for his side after they drew with Cagliari to squander a chance to seal Champions League qualification.

Victory over the Sardinian side would have secured a place in European club football's top competition for the first time since 2013-14 for Milan, but they toiled to a 0-0 draw to leave the top-four race wide open.

"For the season we have had, not finishing in the top-four would definitely be a disappointment, but not a failure. This year we have laid the foundations for a successful future for Milan," Pioli told Sky Italia.

Milan are third on 76 points, level with Napoli in fourth but above them on head-to-head record, and one point ahead of fifth-placed Juventus.

However, the Rossoneri must travel to second-placed Atalanta on the final day of the season next Sunday, while Napoli and Juventus face mid-table sides Hellas Verona and Bologna, respectively.

Milan impressed with comfortable wins over Juventus and Torino over the last week, but they have picked up one point from their last three league meetings with Atalanta, failing to beat the Bergamo club since February 2019.

"It was not our best night, the tempo and quality was not at the level of recent performances," Pioli said.

"Against Juventus we had to play the match of a lifetime, we showed our qualities and can do well again on Sunday.

"We knew that winning would finish it off, so there was a bit of pressure and tension, maybe also a bit of conviction that we could win it no matter what.

"We start again from tomorrow. Atalanta is the only top team that we have not managed to beat in my year-and-a-half in charge, they are very strong. We will be prepared." 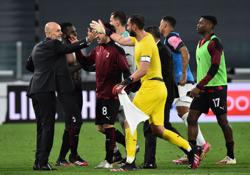