MADRID (Reuters) - La Liga's title race is going down to the wire, with Atletico Madrid, Real Madrid and Barcelona still in the mix as we head into the penultimate weekend of the season.

The following explains what is required for each side to lift the trophy:

In Spain if points are tied at the end of the season, then the teams' head-to-head record is used to decide league placings before other criteria.

Real Madrid have a superior head-to-head record over both their rivals, while Atletico's results against Barcelona mean they would finish above them in the event of a tie.

Atletico face Osasuna on Sunday and Valladolid next weekend knowing that two wins from two will mathematically assure them of glory. Likewise, they would be crowned champions this weekend should they win and Real Madrid fail to do so.

If they were to draw or lose to Osasuna and Real beat Bilbao, then the title will no longer be in their hands.

Real cannot win the title if Simeone's side win both their remaining games.

If Real fail to beat Athletic on Sunday and Atletico beat Osasuna, the title is Atletico's.

However, should their city rivals not pick up three points, and Real emerge victorious, they will leapfrog them either by a point (in the event of an Atletico defeat) or due to their superior head-to-head record (in the case of an Atletico draw).

Should both sides win this weekend then it will go down to the final game of the season, with Real needing to win and Atletico to either lose or draw.

Barcelona to win the title

Ronald Koeman's team need to win both of their remaining fixtures against Celta Vigo and Eibar to stand any chance of being crowned champions. They will also be relying on slip-ups from the two sides above them.

They would need Atletico to take at most one point from their remaining two games -- should Atletico take two points and Barcelona six, then Atletico would finish ahead of them on head-to-head.

They would also need Real to claim no more than three of the six available points on offer to them.

Should Zinedine Zidane's side achieve four points and Barca six, then Real would finish ahead of them on head-to-head.

If Atletico win this weekend then Barcelona cannot be crowned champions. 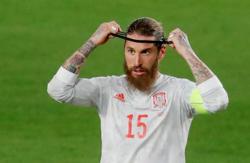