MADRID (Reuters) - Atletico Madrid will be crowned La Liga champions this weekend if they beat mid-table Osasuna and local rivals Real Madrid drop points at Granada on Thursday or Athletic Bilbao on Sunday.

Diego Simeone's side, who suffered a mid-season blip having had a 10-point cushion over their rivals in February, have managed to stay top throughout largely thanks to chasers Real and Barcelona failing to capitalise on their slip-ups.

With Barca, who have drawn their last two games, four points back with only two matches left, Real, who are five off Atleti's 80 with a game in hand, are realistically the only team who can stop the Rojiblancos from lifting a first title since 2014.

"If last week I was nervous, imagine what it's like a week later," Simeone said. "I'm like anyone who lives and breathes passion for this sport. I'd rather not watch (Real) and find out what the scenario is after the game and how it played out.

"For us, it (Osasuna at home on Sunday) is going to be a tough game. We're tired, there's anxiety and we just need to focus on recovering and going game to game. It will be an important match in how La Liga plays out."

The Argentine will be without midfielder Thomas Lemar but otherwise has a fully fit squad to choose from.

Real will be aiming to ensure the title race goes down to the final day when they visit Athletic on Sunday.

Coach Zinedine Zidane will be without five first team players in Sergio Ramos, Dani Carvajal, Raphael Varane, Lucas Vazquez and Ferland Mendy for the trip to the Basque Country.

Barca, who need Atleti to lose their remaining two games to stand a chance of winning the league, host Celta Vigo on Sunday.

Meanwhile, six teams are battling to avoid relegation, with six points separating 15th-placed Alaves on 35 from bottom side Eibar, who have a game in hand and have won their last two. Getafe, Huesca, Real Valladolid and Elche are also in the mix. 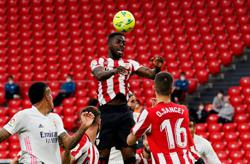