Currently they have been rotating between Mahali Jasuli, R. Kogileswaran, Khyril Muhymeen and Syahmi Zamri in the role since main goal poacher Darren Lok suffered an injury on March 17.

And the Phoenix have been struggling to find the back of the net since then. They have managed only six goals in nine games and on Sunday, despite dominating proceedings, were held 0-0 by Melaka at the Hang Jebat Stadium.

Coach P. Maniam said they have not given up hope on the number nine.

“We don’t know how long Darren will be out. We are looking to get one or two boys. We haven’t zeroed in on a target yet, ” said Maniam.

“But if we can’t find any, we’ll continue using Mahali, Khyril and the others.

“No foreign signings as we want to maintain an all-local line-up this season. Right now, I’m happy with how the locals have performed.”

The Super League will go on a two-month break as the national team prepare for the World Cup 2022-Asian Cup 2023 qualifiers while clubs like Johor Darul Ta’zim, Terengganu and Kedah get ready for the continental tournament. 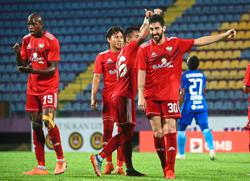