They are the first two players signed by JDT in the second transfer window of the Malaysian League (M-League) which began Monday (May 3) and scheduled to end on May 29.

The presence of De Paula, 34, who is also a national naturalised player, will add options to the team’s attacking line-up, where the striker’s position is currently held by Brazilian import Bergson da Silva and national player Mohd Syafiq Ahmad.

The announcement also put an end to rumours about the 27-year-old Shahrul, who was previously linked with a transfer to Pahang.

On Friday, Perak chief executive officer Rizal Ali Naizali confirmed that the two players had sent in an official letter to leave the club and find a new team for the remainder of the season.

JDT are currently top of the Super League with 27 points after 12 matches, and will also be participating in the Asian Football Confederation (AFC) Champions League competition, which is expected to begin in June. — Bernama 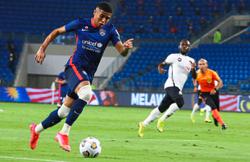