(Reuters) - Brighton & Hove Albion manager Graham Potter said he is focused on his job with the Seagulls amid speculation linking him with a possible move to fellow Premier League club Tottenham Hotspur.

"My focus is on here," Potter said before Sunday's trip to Wolverhampton Wanderers. "We haven't finished anything here, there’s a lot to do and I am really happy here.

"I think that's the challenge of being a football coach, certainly in the modern day, there is speculation, positive and negative.

"It was only a few months ago I was answering questions whether I had the support of the chairman so you've got to take these things with a pinch of salt."

Brighton, 15th in the league on 37 points, will secure top-flight safety for next season if they beat Wolves on Sunday. 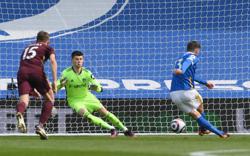