(Reuters) - Manchester United manager Ole Gunnar Solskjaer on Wednesday brushed aside suggestions the Europa League had been devalued after the club's owners attempted to form a breakaway Super League, saying their goal was to win the trophy again.

The Super League proposal collapsed last week in the face of immense pressure from fans, governing bodies and governments, forcing most of the founding members to withdraw their support.

United started the season in the Champions League this season where they were knocked out in the group stage and dropped down to the second-tier Europa League, a competition they won in 2017 under Jose Mourinho.

"We've had a great night in this tournament before. Our focus is on ending the season with a celebration. As soon as we went out of the Champions League, our focus was getting to a final," Solskjaer told reporters ahead the semi-final, first leg against AS Roma.

"With Real Sociedad and Granada, two good La Liga teams, and AC Milan and Roma, two teams with great history, we feel like we've been in a proper competition and have had to dig this out. We're one step away from the big one.

"It will be a dream come true when I lift a trophy for this club as a manager. This season our ambition is to lift a trophy and celebrate. I know how much that can mean for a group going forward."

Solskjaer had upset Roma fans after qualifying for the semi-finals when he said he did not know them and had not seen them play.

The Italian club's supporters put up posters with Solskjaer's quote followed by the words "Make sure he remembers us" but the Norwegian said he meant no disrespect.

"That was straight after the (quarter-final) game, I was just relieved we had gone through. I have watched them but not analysed in depth to give them enough respect," Solskjaer said.

"Roma is a fantastic club with a great history. I have (Francesco) Totti and (Daniele) De Rossi shirts back home that are signed and prized possessions. We have analysed them since we drew them, we are ready for them."

Solskjaer said there were no new injuries since their goalless league draw with Leeds United in the Premier League over the weekend. Marcus Rashford and Eric Bailly are both fit but Anthony Martial remains injured. 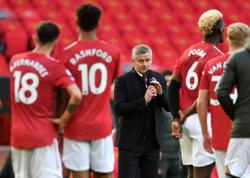