(Reuters) - Former players and fans groups across the globe have slammed plans for a breakaway competition by some of Europe's top clubs, calling the move a "soulless" money grab which will turn supporters away from the game.

"We've already seen strong opposition from leagues and federations who would be affected, and fans as well. Next, I think we will see a backlash from managers and players, too."

Manchester United, Real Madrid and Juventus are among the leading members of the new league but UEFA has threatened to ban them from domestic and international competition and vowed to fight the move.

Former Liverpool midfielder Murphy said players would be risking too much to take part in the Super League.

"You're also being told you can no longer play for your country if you are part of this," said Murphy.

"Again, that's what you dream of doing as a kid, so I just don't see many footballers agreeing to that, which actually gives me hope that this whole idea will quickly fall apart."

Former Manchester United captain Roy Keane said the Super League was all about "money and greed".

"Let's hope it's stopped in its tracks," he told Sky Sports.

"What happens to the memories of what the fans have had over the years?" Richards said.

"They're just forgotten about for the sake of money, and that's the way football has become now. I think it's an absolute disgrace."

Former Liverpool defender Jamie Carragher said he was "sickened" that his former club's reputation was being "tainted by association" with the Super League.

"Football executives always make the mistake of believing they are the most influential force in football," he wrote in a column for The Telegraph. "They swiftly realise that without the supporters, they are weak and powerless."

Fans of the Premier League clubs in the Super League, including Chelsea and Tottenham, joined forces to condemn the move. Chelsea's Supporters' Trust described it as the "ultimate betrayal".

Anger over the proposed league erupted as far away as New Zealand, where a spokesman for one supporters' group urged fans to boycott the teams' products.

"That’s the only way that the owners will listen -- if they get hurt in the pocket," Riccardo Ball, chairman of the Manchester United Supporters Club New Zealand, told Reuters.

"The best you can do as fans is to make yourself heard. Stop buying the merchanside, stop subscribing to the (clubs') TV channels, unfollow them on social media.

"It needs the global support base, not just in Europe, to be heard." 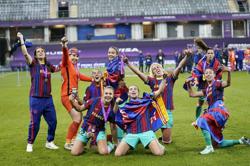