MILAN (Reuters) - Italy's Serie A called an emergency board meeting on Sunday to discuss a newspaper report saying broadcaster DAZN is involved in new plans for a breakaway European Super League, a league source told Reuters.

The meeting, called by league president Paolo Dal Pino, comes ahead of Monday's UEFA executive committee at which plans to expand and reform the Champions League, changing the format from 2024, are expected to be agreed.

The source told Reuters that the league had recently become aware of the plans for a breakaway project and the potential involvement of DAZN.

Corriere dello Sport reported that DAZN, which is owned by billionaire Len Blavatnik's Access Industries, has been working on the formation of this 16-team league, featuring the top clubs in Europe, for some time.

The newspaper did not indicate a source for the report. DAZN was not immediately available for comment. UEFA declined to comment.

In January, European media reported plans for a breakaway European league, citing a document which outlined a 20-team league, outside of UEFA’s control, made up of 15 permanent members and five who would qualify for the competition annually.

Since then leading clubs in the European Club Association (ECA) have been negotiating with UEFA over a new expanded and restructured tournament.

The meeting is being attended remotely, with the three Serie A clubs who could potentially be part of the Super League project - Juventus, Inter Milan and AC Milan - among the attendees, according to Corriere dello Sport.

It caps a tumultuous week for Serie A after seven clubs submitted a written request for Dal Pino to resign over issues including his management of plans to sell a stake in the league's media business. 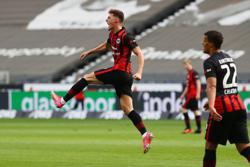