Villa's Grealish out for "few more weeks" after injury setback 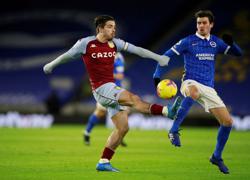 (Reuters) - Aston Villa captain Jack Grealish has suffered an injury setback and could be out for a few more weeks, manager Dean Smith confirmed on Friday ahead of the weekend clash with Liverpool.

Grealish, whose form this season pushed him into the England squad, has been out since February with a shin injury.

"Obviously myself and Jack were quite optimistic to get him back a little bit sooner than we probably should, and he's had a setback," Smith said at a news conference.

"It's probably going to put him back at least a couple of weeks. We'll see how he is but it's unlikely he will be back for a few weeks that's for sure."

Grealish's injury will be a concern not only for Villa as they seek a possible European spot but it will be a blow for England manager Gareth Southgate who handed the 25-year-old his full England debut last year.

"He couldn't tolerate the loading, it's a loading injury. The one thing we are all good about is that we know it's not a long-term injury and he will be back.

"But we, and Jack included in this, we probably pushed him back a bit too soon. He wanted to get back and we wanted him to get back. He will be playing before the end of the season."

Ahead of their trip to Liverpool on Saturday, Villa are in ninth place with 44 points, although they have played a game fewer than most of the sides above them in the table.