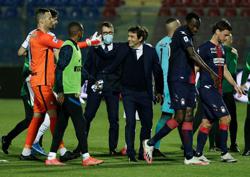 Pallotta, who sold the Italian club to the Friedkin Group in 2020 after nine years as chairman, also revealed the extent of abuse he received following the departures of club greats Francesco Totti and Daniele De Rossi.

In a wide-ranging interview with The Athletic on Monday, American Pallotta talked about the appointment of highly regarded transfer expert Monchi from Sevilla in 2017.

Players like Patrik Schick, Steven Nzonzi and Javier Pastore flattered to deceive after being signed for a combined 93.3 million euros ($110 million). Monchi resigned in March 2019.

"You look at that whole body of work, we were like, ‘those were expensive mistakes’,” Pallotta said.

"At some point, you have some self-doubt and you’re like: ‘Wait a second, I hired the guy who was supposed to be the best in the world at this. Maybe I’m just wrong and I have to let this play out’. I’m not the football expert.

"He was so against getting help. After one month it was just so clear. He felt that he had to prove he was Monchi, that he was not going to listen to anything we came up with from our data."

Pallotta also oversaw the departures of Totti and De Rossi, who retired from playing in 2017 and 2019 respectively.

“I got no benefit from having to watch two of the all-time superstars retire,” Pallotta said.

“On both of them we made what we think was the right decision for the team.”

Totti was installed as a director after hanging up his boots, but resigned in 2019 amid frustrations that he was not being included in decision making.

"He had input and we actually wanted him to have more input," Pallotta said.

Pallotta revealed the extent of the abuse he received from fans following the departures of Totti and De Rossi.

“You want to beat me up, take your best shot,” he said.

“But when they started calling my sisters whores and my mother a pig and attacking their restaurants and businesses and all those kind of things like that... that’s just beyond..OK, that’s not me anymore. That was attacking my family and it wasn’t just one tweet, it was constant for a while."