BRUSSELS (Reuters) - Belgium have finalised their preparations for the European Championship, adding a home friendly against Greece to their schedule, the country’s football association said on Thursday.

Belgium, top of the FIFA rankings and one of the tournament favourites, had arranged a home friendly against fellow finalists Croatia on June 6 and will now play Greece in Brussels on June 3.

The squad will assemble at Belgium’s national football centre at Tubize on May 31, the day before coach Roberto Martinez must finalise his squad.

Belgium will be based at Tubize until they travel to St Petersburg for their opening Euro 2020 Group B match against Russia. They meet Denmark on June 17 in Copenhagen before returning to St Petersburg to play Finland on June 21. 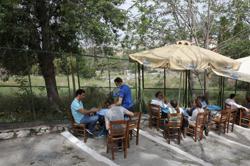