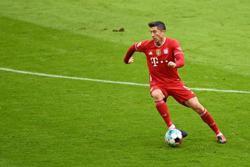 MUNICH (Reuters) - Robert Lewandowski's hat-trick helped 10-man Bundesliga leaders Bayern Munich stay in the driving seat to retain the title with a 4-0 drubbing of Vfb Stuttgart, while Borussia Dortmund lost ground in the top-four race with a draw at Cologne on Saturday.

An early red card for left back Alphonso Davies spurred on Bayern as they scored four times in a 22-minute first-half spell despite being a man light, with Robert Lewandowski grabbing a hat-trick and Serge Gnabry netting the other goal.

Lewandowski's treble made the Poland striker the joint second all-time top scorer in Bundesliga history on 268 goals alongside Klaus Fischer and now only behind Bayern's iconic former striker Gerd Mueller who scored 365 times.

It also means the Pole has now scored 35 goals in 25 league games this term and is five from equalling Mueller's record for the most goals scored in a single Bundesliga season in Germany.

"Just doing my job," Lewandowski posted on twitter after another devastating performance took his season's tally to 42 goals in 36 games in all competitions.

Lewandowski fired Bayern ahead in the 18th minute and Serge Gnabry rounded off a sweeping move to make it 2-0 before the Poland striker finished off Stuttgart with a header and a left-foot shot, thriving from good work by Mueller and Leroy Sane.

The result left Bayern on 61 points from 26 games, four ahead of closest rivals RB Leipzig ahead of a blockbuster clash at the Red Bull Arena on April 3 after the international break.

Dortmund salvaged a point at Cologne thanks to their Norway striker Erling Haaland's last-gasp equaliser but will see a share of the spoils as a bittersweet outcome having fallen behind in the race for a Champions League qualifying spot.

Dortmund stayed fifth on 43 points, four behind Eintracht Frankfurt who gained ground with a 5-2 home rout of Union Berlin after Andre Silva scored twice while Filip Kostic and Timothy Chandler added one each to complement a Robert Andrich own goal.

Haaland fired Dortmund into a third-minute lead with a superb solo effort but Cologne turned the match on its head after Ondrej Duda converted a penalty and Ismail Jacobs hit the roof of the net with a fierce shot from 15 metres.

Haaland showed his predatory skills again in the 90th minute to bundle in a low cross from the right but Dortmund were unable to force a final twist as the hosts held on in stoppage time.

Third-placed Vfl Wolfsburg, who are 10 points behind Bayern and four ahead of Frankfurt, stayed firmly on course to secure a Champions League berth with a 2-1 win at Werder Bremen.

Wout Weghorst struck in the 42nd minute after a Joshua Sargent own goal to give Wolfsburg a 2-0 lead before Kevin Moehwald pulled one back on the stroke of halftime.

Schalke suffered yet another setback to their slim hopes of avoiding relegation as a 3-0 home defeat by Borussia Moenchengladbach left them rooted to the bottom 12 points adrift of the safety zone.

Lars Stindl fired the visitors ahead in the 15th minute when he swept a loose ball into the top corner before second-half headers from Stefan Lainer and an own goal by Schalke goalkeeper Frederik Roennow sealed ninth-placed Gladbach's win. 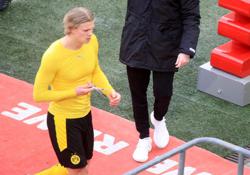