Kramer took over earlier this week following the sacking of Uwe Neuhaus.

Union, unbeaten in their previous three league games and hoping for a European spot next season, had possession but had to wait until the 50th minute and Marius Buelter's header for their first chance.

His team mate Keita Endo should have done better in the 75th when he was sent through but the Japanese curled his shot wide with only keeper Stefan Ortega to beat.

Bielefeld, despite the second-half pressure, held on for a point that kept them in 16th on 19 points, one above Mainz 05, who are 17th.

Substitute Jonas Hector scored an 83rd-minute equaliser to rescue a point for struggling Cologne in their 1-1 draw against Werder Bremen to snap their three-game losing run in the Bundesliga.

Cologne are in 14th place, three points above the relegation playoff spot. 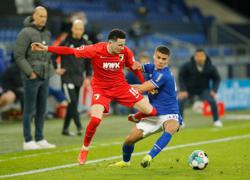