(Reuters) - Portuguese midfielder Renato Sanches has said he was racially abused during Lille's 3-1 win away at Ajaccio in the French Cup on Sunday, becoming the latest high-profile footballer in Europe to receive such abuse.

Although the match was held behind closed doors due to COVID-19 restrictions, some supporters of the second division club were able to scale a fence a few metres behind the goal.

"For all the racist comments, we continue to laugh," Sanches, who claimed an assist for the French Ligue 1 leaders, wrote on Instagram https://www.instagram.com/p/CMIbWAjHhoO. "Renato go and pick cotton."

The slur refers to the slave trade between the 15th and 19th centuries when African men, women and children endured a life of subjugation on cotton plantations.

Elsewhere, Algerian winger Adam Ounas also revealed he had received racist abuse on social media after he scored a goal and assisted another in Crotone's 4-2 Serie A win over Torino on Sunday.

Ounas shared screenshots of messages he had received on Instagram where he was called a 'monkey' and told to 'go back to Africa' with a caption: "Is this normal?"

The incidents are the latest attacks on players by fans and follows the abuse of a number of Premier League players in recent months on social media. 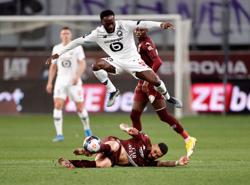