The new and the old: Newly appointed Selangor skipper Brendan Gan (left) said he had learned a lot from former captain Taylor Regan and is well armed to play the skipper’s role to a tee.

PETALING JAYA: Selangor’s Brendan Gan feels that he has a “Giant” shoe to fill after he was made captain.

His first test will be to lead his comrades against Pahang at the Petaling Jaya Stadium today.

“It was quite surreal when I got to know that I was made team captain. It’s a massive job but an honour to lead such a big club.

“This is a task I’m not going to take lightly, ” said the former Perak and Kelantan midfielder.

“It’s a big responsibility to fill the shoes left by Taylor. I have learnt a lot from him and also from other captains in my previous clubs.

“Each skipper has different ways of taking charge. For me the narrative doesn’t change, I will give my all and wear my heart on my sleeve.

“I do not want to leave the field with the feeling of what could have been. We have 11 players on the field so all of us have to step up and lead. We shall lead collectively to make Selangor successful.”

His all-action style, whether it’s his blistering runs or crunching tackles, has certainly endeared well with football fans in the region.

But most importantly, Brendan wants to bring his winning mindset into the team.

“When have Pahang not been a good side? They always seemed to have a good team and they have recruited well this season. It will be a challenging game but we have to be confident with ourselves.”

Last season, Selangor kicked off the season by beating Pahang 2-1 at the Darulmakmur Stadium in Kuantan, with Brendan scoring the winning goal in the 89th minute. 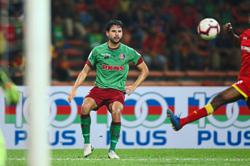