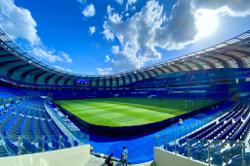 Safawi Rasid opened the scoring in the 35th minute as JDT went on to take the Charity Shield with a 2-0 win over Kedah on March 5, 2021. – Bernama

The reigning Super League champions kicked off their campaign by retaining the Charity Shield after beating Kedah 2-0 at the Sultan Ibrahim Stadium on Friday (March 5).

Winger Safawi Rasid was the first goalscorer when he thumped a vicious shot in the 35th minute, while Spanish-Malaysian midfielder Natxo Inso unleashed a 25m shot in the 68th minute to seal the win.

Kedah did not assert themselves in the game as JDT showed that they continue to be a force in the Super League.

The win means that the Southern Tigers have won their fourth straight Charity Shield and sixth title overall.