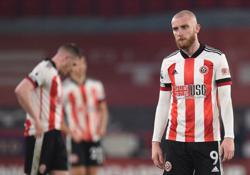 (Reuters) - Liverpool manager Juergen Klopp is hopeful Jordan Henderson will return to action this season after the skipper underwent groin surgery and will be sidelined for at least five weeks.

England midfielder Henderson, who has been deputising in Liverpool's injury-ravaged defence, sustained the injury during Saturday's 2-0 home defeat by Everton in the Premier League.

"The best-case scenario, I don't know. It's not a quick one, but we all hope there's a possibility for him to play a few games this season," Klopp told a news conference ahead of Sunday's trip to Sheffield United.

"We have so many injured players who are not available at the moment and most of them are leaders in this group."

Central defenders Virgil van Dijk and Joe Gomez are likely to miss the rest of the campaign with knee problems, while Joel Matip has been ruled out until next season with an ankle injury.

Fabinho, who was also moved from midfield to central defence to help plug the gaps, picked up a muscle problem earlier this month, while forward Diogo Jota is yet to return after being out for over two months with a knee injury.

In a statement, Liverpool said Henderson had undergone a successful procedure on his abductor injury.

"No specific time scale is being placed upon his return; however, he is ruled out initially until after the March international break," the reigning champions said.

"Obviously gutted to have picked up an injury but will do everything I can to support the team while working on my rehab," tweeted https://twitter.com/JHenderson/status/1365242008462389251 Henderson.

Liverpool ripped up the record books last season on the way to their first English top-flight title in 30 years, but a season marred by injuries and poor form has left them sixth in the table with 40 points from 25 games.