BARCELONA (Reuters) - Barcelona's Jordi Alba declared his side were back in the Spanish title race after they beat Elche 3-0 on Wednesday to cut the gap to La Liga leaders Atletico Madrid to five points.

After making a terrible start to the campaign, which led coach Ronald Koeman to discount their title credentials back in December, the Catalans have won eight of their last 10 league matches to move within sight of Diego Simeone's leaders.

Atletico have a game in hand on Barca but have dipped in form since the start of this month, winning one of their last four league outings, while their confidence took an extra hit with Tuesday's 1-0 defeat to Chelsea in the Champions League.

"The title race is on," Alba told reporters after rounding off the scoring against Elche following two second-half goals from Lionel Messi.

"People have been counting us out some weeks and saying we're back in the mix other weeks but we know it's up to us if we want to fight for the league. The other teams will keep slipping up, just as we have."

Barca, who climbed back above Sevilla into third thanks to the victory and are two points behind second-placed Real Madrid, would have been even closer to Atletico had they not conceded a late equaliser to draw 1-1 at home to Cadiz on Sunday.

They looked nervous in the first half against Elche and created little before overwhelming their struggling opponents after the interval.

Koeman was critical of the team's first-half performance, which led to Messi berating his team mates before halftime, but he was pleased with their reaction.

"Everyone could see that we were not playing with enough pace or intensity in the first half and it's good that Messi, as our captain, asked for more intensity. We were very flat," said the coach.

"We wanted to play well but sometimes the opponent makes it tough and we have played a lot of games recently and were tired. We're humans, not machines, and sometimes you play worse than others. But we showed lots of character in the second half." 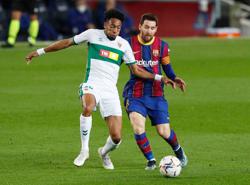