Rangers players who broke COVID-19 rules back in training

(Reuters) - Three Rangers first-team players who were removed from the squad for breaching COVID-19 protocols have returned to training, the Scottish Premiership leaders said.

Midfielder Bongani Zungu, and defenders Nathan Patterson and Calvin Bassey apologised to fans on the club website on Wednesday.

The trio, as well as striker Dapo Mebude and goalkeeper Brian Kinnear, who are both out on loan, were ordered to self-isolate for 10 days after local media reported they had attended a party in Glasgow which was broken up by police.

"We are both now satisfied that the players completely understand their obligations to our club and accept with sincerity the strong disciplinary sanctions that we have imposed upon them for letting us all down," the statement read.

Rangers, who need seven points from their last eight games to clinch the title, host Royal Antwerp in the second leg of their Europa League last-32 fixture later on Thursday.

They Glasgow club have a 4-3 lead from the first leg in Belgium. 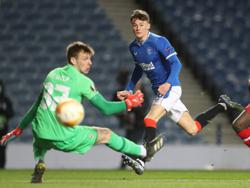