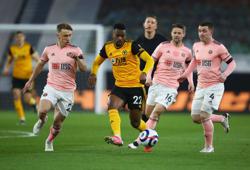 (Reuters) - Arsenal winger Willian has become the latest Premier League player to be racially abused online and the Brazilian shared screenshots of the messages he received on social media.

The 32-year-old Brazil international was targeted by two different users and he highlighted the messages on Instagram with the caption: "Something needs to change! The fight against racism continues."

Arsenal condemned the abuse and said anybody with a club membership that sends such messages would be banned.

"We all need to work together to drive this behaviour out. This includes clubs, governing bodies, fans, media and politicians; but requires the help and commitment of social media companies," a club spokesperson was quoted as saying by British media.

"We commit to using our voice and network to strengthen measures and action taken by relevant authorities to punish those responsible for this abuse which affects us all."

Willian is the second Black Arsenal player to face abuse this week after forward Eddie Nketiah was sent a racist message on Twitter ahead of Thursday's Europa League last-32 tie against Benfica.

Instagram has announced a series of measures to deal with online abuse, including removing accounts of people who send abusive messages, and developing new controls to help reduce the abuse people see.

Arsenal chief executive Vinai Venkatesham on Thursday warned that abuse towards Black players was becoming normalised and was "the biggest problem in the game at the moment".

(Reporting by Arvind Sriram in Bengaluru; Editing by Aurora Ellis)