Everton's Calvert-Lewin, Allan in line for return at Liverpool (Reuters) - Everton have been handed a double injury boost ahead of Saturday's Premier League clash at champions Liverpool, with striker Dominic Calvert-Lewin and midfielder Allan both fit, manager Carlo Ancelotti said on Friday.

Brazil international Allan has been out since mid-December because of a hamstring issue, while Calvert-Lewin, Everton's top scorer with 18 goals in all competitions, has missed their last two games with a similar problem.

"Dominic is back and also Allan is back. We have many games in this period so it is important to have the squad available," Ancelotti told reporters.

"To have Allan back is really important for us. He can add more intensity, more concentration defensively."

Defender Yerry Mina will miss the trip to Anfield, however, after sustaining a calf injury against Manchester City on Wednesday, with the Colombian facing up to four weeks out.

Everton are without a win in their last 20 Premier League games against Liverpool and Ancelotti said his side were determined to put an end to the dismal run.

"The motivation is high," he said. "Every derby against Liverpool, you want to win. It's a long time since Everton won a derby but it could be the right time tomorrow."

"To play against Liverpool we have to compete on the intensity level they use. You have to try to find solutions up front because you cannot only defend."

Goalkeeper Jordan Pickford came in for intense criticism following a tackle on Liverpool defender Virgil van Dijk in the reverse fixture in October, but Ancelotti said the England international would not let the incident weigh on his mind.

"Of course he was not happy when this injury happened, but now he is focused on the game and only on the game," he said. 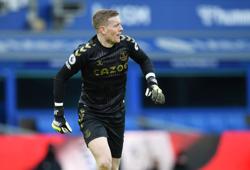