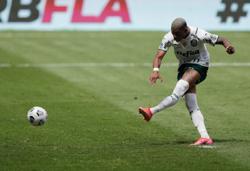 RIO DE JANEIRO (Reuters) - When Palmeiras midfielder Patrick de Paula walks out for the Copa Libertadores final against Santos at the Maracana Stadium on Saturday, Scottish club Celtic can claim some of the credit.

The 21-year-old De Paula, known as Patrick in Brazil, learned his football wearing the famous green-and-white hooped jersey donated by the Glasgow club to a community project in the Mario Lombardi neighbourhood of Rio de Janeiro.

Today that project is known as Mario Lombardi Celtic, thanks to a long-standing partnership that began in 2006 when members of the Celtic supporters club in Rio made a charitable donation.

Celtic were founded in 1888 seven years after being inspired by Hibernian, a club formed by Irish immigrants in Edinburgh, and they proudly expanded on Hibs’ charitable aims.

One of the members of the Rio Celtic supporters club organised a visit to the community soccer school and soon after Celtic agreed to send kits.

“What we would get was discontinued stock from the Celtic shop,” said then supporters club president Jimmy Dunnet.

"There might have been an order of a full set of strips for a wee team and then cancelled, we would get that. Or stock that hadn’t sold when they moved on from brand A to brand B.”

Bags of kit are usually brought over by Celtic fans who live in Rio. In addition to the hoops, the club gets second and third strips. One year a printing error meant the whole team played with number six with (player Bobo) Balde on the back.

Patrick grew up nearby and was a regular on the community’s astroturf pitch by the age of seven. His talent, said coach and organiser Gerson Oliveira, was obvious.

“We had to polish him of course but he knew how to shield the ball, he had a great left foot, he was a class above. It was like he was born with a ball at his feet.”

Patrick, who earned the nickname Pelezinho, or little Pele, moved through the ranks, usually playing in the age category above his own, and caught the eye of Rio club Botafogo. He later ended up at Palmeiras, where he made his debut in January 2020.

He is now part of a potent young guard at the Sao Paulo club. Danilo, 19, and Gabriel Menino, 20, play alongside him in midfield, while Gabriel Veron, 18, is a pacy winger.

All four are expected to feature in Saturday’s all-Brazilian Libertadores final against Santos at Rio’s famous Maracana.

“This is a unique moment, the moment I’ve always waited for,” Patrick told Reuters.

Community soccer school coach Gerson has turned down an invitation to watch the match at Patrick's family home, believing the player turned his back on his roots and mentors.

But the kids at Mario Lombardi are aware of their predecessor’s rise and will be cheering for Palmeiras, as will Gerson, although his real love is now in Glasgow.

“This shirt is our second skin,” Gerson said of his hooped Celtic jersey. “We’re not Vasco or Flamengo, we’re all Celtic here, we live and breathe Celtic now. I am a Flamengo fan but I have become more of a Celtic fan.”

(Reporting and writing by Andrew Downie; Editing by Ken Ferris) 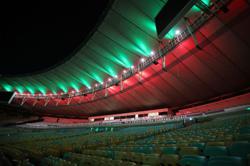 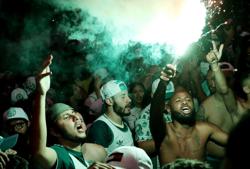