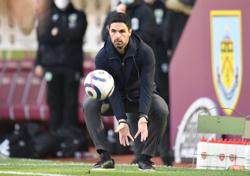 SOUTHAMPTON, England (Reuters) - Alexandre Lacazette and Bukayo Saka scored and had an assist each as Arsenal won 3-1 away to Southampton in the Premier League on Tuesday, exacting revenge for their FA Cup fourth-round loss to the Saints.

Southampton, who had edged past Arsenal 1-0 on Saturday, took an early lead through Stuart Armstrong, but the London club fought back with Nicolas Pepe levelling before goals from Saka and Lacazette wrapped up the points.

Arsenal's fifth league win in six games lifted them to eighth place in the table on 30 points, one ahead of Aston Villa, Chelsea and Southampton.

Lacazette almost put Arsenal ahead in the second minute as he found himself one on one with Alex McCarthy, but the Southampton keeper was able to block the Frenchman's shot with his legs and the ball went behind for a corner.

Saka put the Gunners ahead six minutes before halftime, latching on to a superb pass from Lacazette before rounding McCarthy, who had rushed out of his goal, and slotting the ball home.

Southampton's high-pressing style paid dividends in terms of winning possession in dangerous areas, but their problems in front of goal continued and Bernd Leno made some fine saves to keep them out.

The game was put beyond doubt in the 73rd minute as Saka collected a superb cross-field pass form Cedric Soares before crossing for Lacazette to score the third.

Ward-Prowse had a late chance from a free kick but Leno made another excellent save.

Teenage winger Saka was delighted to get his fifth Premier League goal of the season as his side made amends for the defeat at the weekend.

"It was much better than Saturday, Saturday was disappointing. We are the (FA Cup) holders and we took it hard. We exploited their weaknesses and got the win we deserved," he told BT Sport. 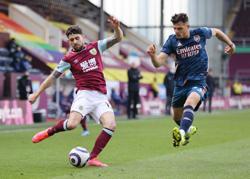 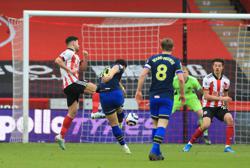