MADRID (Reuters) - Barcelona's transfer business has been criticised by fans and pundits alike in recent years but few decisions could have been more ill thought out than allowing Uruguay striker Luis Suarez to leave for Atletico Madrid in the close season.

In addition to upsetting the club's talisman Lionel Messi by the manner in which they handled Suarez's departure, Barca weakened themselves and gave Atleti the kind of goalscorer they had been missing for the past few campaigns.

"I couldn't believe what they did with Suarez, it was crazy," Messi told Spanish TV station La Sexta in December.

"They let him go for free, paying his contract up, and to top it all off they gave him to a side who were going to be fighting for the title against us."

The sort of games Diego Simeone's Atleti side were drawing last season are being turned into wins this term thanks to an inspired Suarez.

The Uruguayan's double against Eibar - including his second last-minute winner in the past three games - took him to the top of the Liga scoring charts with 11, having netted six in his last five appearances.

Suarez will lead the line for Atletico at home to Valencia on his 34th birthday on Sunday knowing a win would maintain at least a seven-point advantage over Real Madrid in second and a 10-point gap to Barca in third, with a game in hand.

"I knew I was joining a club that is fighting for important trophies and, whether it's through goals or assists, all I want to do is help the side," Suarez said this week.

Reports in the Spanish media say that if the forward hits four more goals he will be given an automatic pay rise.

Given the rewards his goals are propelling Atleti towards, it will be a small price to pay for a club seeking their first title since 2014. 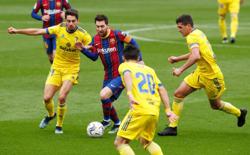