EIBAR, Spain (Reuters) - Eibar goalkeeper Marko Dmitrovic defied convention by scoring a penalty but it was Luis Suarez's spot kick in the dying minutes that proved conclusive as Atletico Madrid secured a 2-1 away win on Thursday which lifted them seven points clear at the top of La Liga.

Dmitrovic gave Eibar the lead in the 12th minute, coolly deceiving his opposite number Jan Oblak.

Dmitrovic, 28, had never previously scored a penalty in his career and became the first goalkeeper to do so in La Liga since Las Palmas' Nacho Gonzalez, who netted from the spot against Athletic Bilbao in 2002.

Suarez levelled for Atletico five minutes before halftime, beating Dmitrovic from inside the area after Marcos Llorente had won the ball back on the edge of Eibar's box.

Dmitrovic made an outstanding late save to thwart Joao Felix late in the game but Suarez had the final say, drawing a foul from Anaitz Arbilla to earn a penalty that annoyed Eibar's players and coach Jose Luis Mendilibar.

Suarez oozed calm and chipped the ball past Dmitrovic to give his side all three points, while Eibar were then denied a penalty in added time, appealing in vain for a handball against Atleti's Stefan Savic.

The Uruguayan's penalty secured a sixth successive league win for Atletico, giving Atletico a seven-point lead over nearest challengers Real Madrid with a game in hand.

Atletico coach Diego Simeone heaped praise on Suarez for winning another difficult match which strengthened his side's bid for a first league title since 2014.

"He is a decisive player, he was always focused on winning the game, he got his first goal after a second ball and then won the penalty, wanted to take it and showed real leadership to score," Simeone said.

Suarez added: "Today was another demonstration that we'll have to keep this level of performance up if we want to fight to win important things.

"The game was very difficult for us in the first half but we were able to equalise. The second half was a battle, a war, and it was so tough to create chances.

"But we have to be convinced of our own ability and remember that if the team stays focused and we all contribute, we can achieve great things." 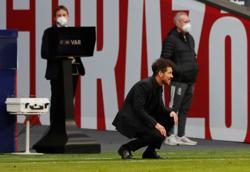 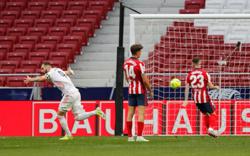