MANCHESTER, England (Reuters) - Manchester City manager Pep Guardiola said he will drink a glass of wine to celebrate his 50th birthday on Monday but it might be something more bubbly at the end of the season if his side sustain their current form.

City's 4-0 hammering of Crystal Palace on Sunday was reminiscent of the way they often tore sides apart during their back-to-back Premier League title seasons.

While Kevin de Bruyne showed once more that there is not much he cannot do with a football at his feet, John Stones again showed that apart from being a vastly-improved defender he can chip in at the other end with an unlikely double.

Ilkay Gundogan and Raheem Sterling added special goals of their own as City claimed a seventh win in nine league games, having drawn the other two.

They are two points behind leaders Manchester United with a game in hand, but Guardiola was not about to start talking up his improving side's title credentials.

"I don't want to send any messages. It is Aston Villa on Wednesday. It is one game at a time," he said.

"A few weeks ago we were points behind Liverpool and we win a few games and that's what we have to do. Now I will drink a good glass of wine and then think about Aston Villa."

Guardiola had special praise for Stones, a player who because of injuries and loss of form has struggled at times to fulfil his potential since moving to City from Everton in 2016.

"If there is one player I am more than pleased that everything is going well, it's John Stones. He is playing because he deserves it," Guardiola said of the 26-year-old.

"He has struggled for many reasons in the past, it belongs to him how he overcame this. He doesn't make mistakes and he's created a good partnership with Ruben Dias."

Stones said his form was down to hard work. "I went away and worked hard every day on the training pitch, in the gym, making sure I'm ready to be called on," he said.

"Looking at every detail, recovery or whatever, I dedicated everything to get back into the team and to show I'm fighting for the shirt, my team mates and the club." 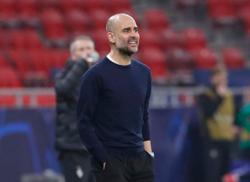