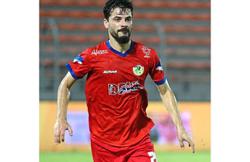 Big ambition: Kuala Lumpur’s Paulo Josue (left)) is confident he can lead the team to win a title this season.

PETALING JAYA: Paulo Josue is close to hitting a century of matches for Kuala Lumpur and what better way to celebrate it by lifting a trophy.

The 31-year-old Brazilian midfielder has played 86 matches for the club and is on course to hit the mark as there are 22 Super League matches, not including Cup ties.In an interview published on the team’s official page, he feels the newly promoted side are capable of winning honours under the new management.

The City Boys are serious in making an impression in their return to the big league by appointing former national player Stanley Bernard as their chief executive officer and have also hired a reputable coach in Bojan Hodak.

“I’m confident of winning something. After one week of training, you can see that we have a good set of players, especially the locals. This is the best squad we’ve had in a long time. With this players around we will definitely be fighting for honours now and in the future, ” said Josue, who has scored 27 goals in the last four years.

“I’m entering my fifth season with KL and won the Premier League with them in 2017. Now as captain, I want to lead them to at least one trophy.

“But to do so, we have to work hard, really hard.”

Paulo also revealed his past experience in the Super League has not been memorable especially their 2019 season where they were demoted after finishing last.

“Many things did not work out for us then. Defeats in the early stages undid us as we couldn’t bounce back.

“This season, I will not let that happen and I can assure you we will hold our own against the top teams.”