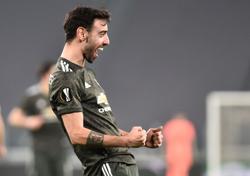 (Reuters) - Manchester United midfielder Bruno Fernandes has been named Premier League Player of the Month for December, the fourth time the Portuguese has won the award since signing for United last January.

Fernandes has been fundamental to United's resurgence that sees them top of the Premier League table ahead of their trip to Anfield to take on Liverpool on Sunday.

In December, Fernandes' three goals and four assists helped United win four and draw two of their six league matches in the month. The 26-year-old has 15 goals across all competitions this season for United.

"Three goals and four assists was a complete month," Fernandes said after receiving the award. "Scoring and assisting your team-mates is perfect. I want to achieve other trophies and awards but I’m really happy to make history."

His award means Fernandes has become the first player to win the award four times in a calendar year, having also done so in February, June and November 2020.