Turtles are not slow when it comes to signing up newbies 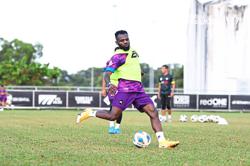 Early start: Terengganu coach Nafuzi Zain (second from left) believes in wrapping up his line-up for the new season as quick as possible.

PETALING JAYA: Calling them the missing pieces to his jigsaw puzzle, Terengganu coach Nafuzi Zain is a happy man after sealing some of their new signings.

The Turtles are among the early birds who are close to naming their squad for the new Super League season.

Terengganu did well last season to finish third and will compete in the AFC Cup next season.

“I actually have to thank these players. Terengganu are running on a budget but these signings, despite getting better offers elsewhere, decided be part of our project, ” said Nafuzi.

“And I’m sure another reason is to compete in the AFC Cup. They are here to play, to learn, to become a more experienced player. As a coach, what more do you want?

“We want to build a solid foundation for the future, hence our reliance on youths. We will also bring in some boys from the Terengganu II and President Cup into the first team.

“It is also good that we wrap up the signings early so that we’ll be ready to start the pre-season. We also hope to confirm the foreigners soon.”