PARIS (Reuters) - Lille heaped pressure on champions Paris St Germain when they took the Ligue 1 lead, at least provisionally, with a 2-1 home victory against Girondins de Bordeaux on Sunday.

Jonathan Bamba and Jose Fonte both found the back of the net before the break to put Lille on 29 points from 14 games, one point ahead of PSG who host fourth-placed Olympique Lyonnais later on Sunday (2000GMT).

Toma Basic scored for Bordeaux, who had picked up seven points from their last three outings and dropped down to 11th on 19 points.

The top five teams in Ligue 1 are now all within three points.

Lille, who have only lost one league game this season, were focused throughout, giving little to their opponents in yet another solid performance.

Bamba put the hosts ahead after 16 minutes with a delightful curled shot that first touched the far post.

Basic, however, levelled on the half hour mark by latching on to Hatem Ben Arfa's corner.

Benoit Costil kept Bordeaux afloat with a fine save to deny Jonathan David but he could not deny Fonte, who restored Lille's advantage, on the stroke of halftime.

Christophe Galtier's side kept pushing after the break, but Burak Yilmaz and David both missed clear chances.

Lille, however, stayed solid at the back and were barely bothered as they cantered to a routine victory. 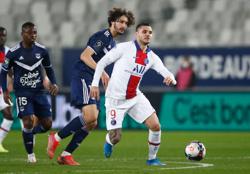