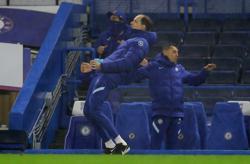 (Reuters) - Sevilla coach Julen Lopetegui does not plan to rest any players for Wednesday's Champions League game at home to Chelsea even though his side have already qualified for the knockout stages and face Real Madrid next weekend.

Both sides are locked on 10 points and are into the next round although the winner of Wednesday's match at the Sanchez Pizjuan will clinch top spot in Group E and be seeded for the last-16 draw.

The coach said he still hoped to be able to count upon forwards Luuk de Jong and Lucas Ocampos, who missed training on Tuesday, while he will be without first-choice goalkeeper Bono and forward Carlos Fernandez due to testing positive for COVID-19, plus injured midfielders Marcos Acuna and Suso.

"A couple of our players have not been able to train (De Jong and Ocampos) and I hope we can get them back and not lose anyone else," Lopetegui told a news conference on Tuesday.

"The match is a very exciting challenge, against a team that is designed to win the Champions League. They have the best attack in England (along with Liverpool) and we are very excited about playing for the prize of top spot."

Having made a rough start to the domestic season, Lopetegui's side are on a run of five consecutive wins in all competitions.

Chelsea are unbeaten since September and were on a run of six straight victories until Sunday's goalless draw at home to Premier League leaders Tottenham Hotspur.

"We are in good form despite the players we are missing but I expect a very complex game against a side with a lot of individual and collective talent and we'll have to double our work and efforts if we want to win," he added.