PETALING JAYA: Skipper Victor Nirennold is staying put with UiTM to take them to greater heights in the Super League next season.

A leader at the back, and someone who inspires confidence in every game, Nirennold has led the team to a creditable sixth-placed finish in their debut this season. Nirennold’s decision to remain with the club is a big relief after several imports have either left or rumoured to leave.

The 29-year-old centreback was happy that the club wanted him.

“The club wanted me to stay, as I was very much a part of the UiTM family. It’s a relief that I don’t have the stress of looking for new clubs, ” said the former SC Da Nang player.

“My family loves Malaysia, particularly Kuala Lumpur and I wanted to continue working with coach Frank (Bernhardt), who has also extended his stay with the team. These factors played a role in my decision.

“There will be changes in the line-up for sure but we will welcome them and learn to adapt. Whether it’s a local or foreign, I will make sure they settle down well on and off the pitch.”Nirennold believes that the sports science measures implemented by the UiTM management were the key to their success in their first season and they will continue to embrace it.

“The club and the coach looked into sports science data, particularly for every player. The club invested in sports science equipment and tried to improve things within the set up, ” said Nirennold. “We can further improve our game. Our opponents now know our style, how we play and they also know what to expect. We will be better prepared.

“Our goal is to perform better next season and make our fans proud. We want to show everyone that our performance in the Super League last season was not a fluke.” 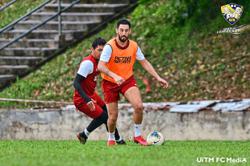