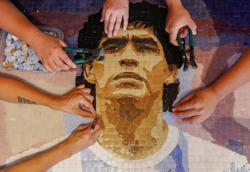 WHEN I was a kid growing up in the 1980s, only three things mattered to me – animals, music and football. I guess fundamentally, little has changed since.

While I still can’t single out a favourite animal or name my favourite music act, my choice of favourite footballer has never wavered. Diego Maradona is still the one and only.

Why? Because there was nothing like him before, and in all likelihood, there will be nothing like him again. You have to be born with his heart to understand what embodied greatness, what bringing happiness to people meant and how a legacy is truly defined.

He brought immeasurable joy to my family; one we’ve carried in our hearts for nearly four decades. Of course, through the 1980s and early 1990s, it was mainly his football that coaxed our love for him.

But as the years went by, what became obvious was Maradona transcended football. He became a person, not a mere demigod. He took care of his family. He looked out for teammates, and he fought footballing authorities to improve the game’s conditions for players. The official film of the 1986 World Cup wasn’t titled Hero (which I’ve watched a few hundred times) for nothing.

Reams of text have been used in extolling the virtues of his footballing brilliance. And likewise, so much has been written about his personal life, too.

My interest in the Argentine national football team began from the 1982 World Cup, most likely because they were the reigning champions at that time, and also because I liked their jersey as a kid. But I do recall being more of a Brazil fan then.

However, leading up to Mexico 86, Maradona proclaimed that he would be king at the tournament. Having a goal and realising a prophecy are two entirely different things, but as with how things are with Maradona, he made them one and the same, like how he brought his supporters and haters together in their love for his footballing genius.

I have friends who are devout England fans, and who hated Maradona for his infamous Hand of God goal. But they won’t bat an eyelid when asked who the greatest footballer is. Now if that doesn’t solidify someone’s legend, little else will.

Every now and again when I’m down, all I need to do is hit Youtube and watch his magic and I’m instantly stirred by passion and unbridled joy. If I had to put it down to a single thing that Maradona did for me, it was his ability to make me happy. And I do believe that’s how it is for most people who love him. And ultimately, it all came from his love of the game and how he played it.

Maradona was a near biblical figure who turned Hollywood superheroes into fakes because of how real he was. His abilities were supernatural and his following quasi-religious. No one personified the No 10 on their jersey like him. He wasn’t an Argentinian ambassador for the game – he was a global one.

For those of us fortunate enough to have witnessed him in his pomp, we are truly blessed. We watched art mixed with guile, heart mixed with craft – Maradona was the ultimate alchemy of the great game. And for that, I thank him for eternal pleasure.

Zico once famously said that he saw Maradona do things on the pitch that even God wouldn’t have thought possible. So, would that make Maradona God? Why not. 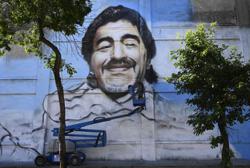