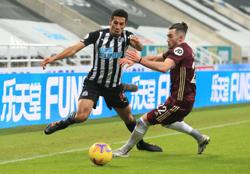 LONDON (Reuters) - Perseverance finally paid off for Newcastle United's Brazilian forward Joelinton as he shrugged off a night of frustration to help his side to a 2-0 victory at Crystal Palace in the Premier League on Friday.

The 24-year-old's Newcastle career is yet to take off after his 40 million pounds move in July 2019.

But his astute pass set up Callum Wilson for his seventh league goal this season in the 88th minute at a chilly Selhurst Park before Joelinton's deflected shot sealed the points.

It was only the South American's third league goal since his move from Hoffenheim but his work rate could not be faulted.

Palace were looking threatening late on after manager Roy Hodgson sent on forwards Christian Benteke and Michy Batshuayi to try and win the game, but his side were left deflated.

Newcastle's win, after back-to-back league defeats, lifted them to 10th in the table on 14 points from 10 games with Palace a point behind in 13th place.

"We created a few opportunities and missed the right pass but the strikers showed a little bit of quality," Newcastle manager Steve Bruce said. "Joe's price tag and wearing the number nine at Newcastle, he has struggled with it.

"But we are starting to see a bit from him with his overall strength and we're pleased for him."

Newcastle's early season promise had stalled but they began in sprightly fashion with Palace defender Gary Cahill having to intercept a dangerous low cross by Joelinton early on.

The Brazilian failed to capitalise on a couple of chances, notably just before halftime when Palace defender Scott Dann gifted him the ball but his shot lacked conviction and was straight at goalkeeper Vicente Guaita.

Palace, missing the flair of Wilfried Zaha who has tested positive for COVID-19, picked up after a cagey start and the lively Eberechi Eze stung the fingers of Karl Darlow who then made a fine save to keep out Jeffrey Schlupp's powerful effort.

Joelinton had another great chance with 20 minutes left but he failed to make proper contact with an inviting cross.

Benteke's header forced a save by Darlow before Cheikhou Kouyate found space and looked poised to score but his shot was superbly blocked by defender Federico Fernandez.

It looked as though the points would be shared but Newcastle then stunned the hosts on the counter-attack with Joelinton playing in Wilson who finished confidently.

"This is not a performance we can be particularly proud of," Palace boss Hodgson said. "We have to accept that if we want to get points on the board then we need to do better." 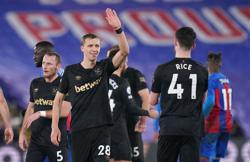 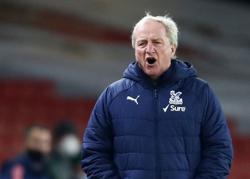