“It’s a hard decision to make and I still could not believe that I’ll be leaving my home state. It was never my plan but there are things beyond our control, ” said Nik Sharif in his Instagram post.

“I need to thank coach Dollah and Pahang for giving me the opportunity to progress as a footballer.”

Nik Sharif is the second player to leave the Elephants after winger Faisal Halim.

During the mid-season, the east coast side lost their Gambia-born attacker Mohamadou Sumareh due to a wage dispute.

Pahang are in the midst of signing Penang’s Argentine striker Sergio Aguero and are also interested in Terengganu’s English midfielder Lee Tuck.

Their manager Datuk Mohammed Suffian said Faisal and Nik Sharif’s departure has not affected them much.

“We accept their decision to seek a new challenge. Life goes on for us and our preparation for the new season goes on as normal, ” he said.

“We have a few young players who showed potential this season and we believe they can give the established players in the starting XI a fight.” 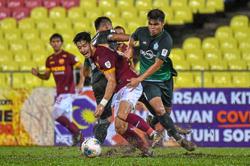