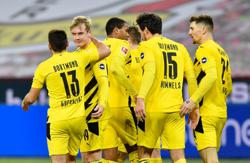 BERLIN (Reuters) - Borussia Dortmund's Jadon Sancho could return to the lineup against Club Brugge in the Champions League on Tuesday with coach Lucien Favre saying rotation will be the key for their busy schedule until the end of the year.

The 20-year-old England international, who is nowhere near his sensational form of last season with two goals in nine games in all competitions so far, sat on the bench for the entire game during their 5-2 Bundesliga win over Hertha Berlin on Saturday.

"We decided in favour of freshness on Saturday," Favre told reporters on Monday when asked why Sancho had been benched.

"We will continue rotating because that is necessary. I can see no player able to play 10 matches in 30 days, especially in attack.

"We have a lot of options up front and we will continue to rotate."

Dortmund striker Erling Haaland scored four goals against Hertha while 16-year-old Youssoufa Moukoko became the youngest player in Bundesliga history when he came on for the Norwegian in the 85th minute.

Whether Moukoko will feature on Tuesday for his European debut is still unclear.

"It is difficult to talk about this now. We have a lot of options in attack," Favre added.

Dortmund are top of Group F on six points from three games, with Italy's Lazio second on five and Brugge a further point behind in third. Dortmund beat Brugge 3-0 in Belgium earlier this month.

"It was very important that we kicked off these weeks of 10 10 games with a win (over Hertha)," Favre said.

"But all the games are tough and will get tougher. We have to keep working at it." 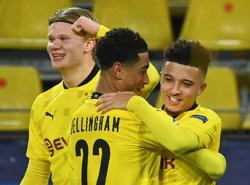 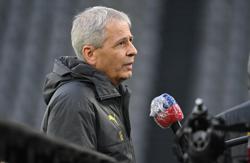