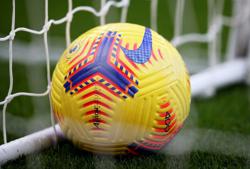 (Reuters) - English Football League (EFL) clubs on Thursday agreed for League One and League Two teams to receive the rescue package proposed by the Premier League in order to cover gate losses for the 2019-20 and 2020-21 seasons amid the COVID-19 pandemic.

The EFL, which represents the three divisions below the Premier League, last month rejected a 50 million-pound ($65.66 million) offer from the top flight for League One and League Two clubs, saying it wanted a deal which covered all its 72 teams.

The Premier League has since revised its bailout offer and is set to help Championship clubs as well but only those that are "suffering significant COVID-19-related hardship".

"... A collective agreement in principle was made to move forward and finalise the negotiations, with Championship Clubs making it clear today that they wanted to ensure their colleagues in League One and League Two received the proposed 50 million pounds financial support package," the EFL said in a statement https://www.efl.com/news/2020/november/efl-statement-rescue-package.

"Championship Clubs also acknowledged that discussions in respect of the levels of support they will receive will remain ongoing."

In a meeting, the EFL clubs also agreed to support the Premier League's strategic review to assess the future structure and financing of English football.