Out of action: Winger Faisal Halim has been injured since the final league match of the season.

PETALING JAYA: Pahang coach Dollah Salleh wants his players to make amends for their poor outing in the Super League with a good showing in next month’s Malaysia Cup competition.

The Elephants were expected to trample their opponents after finishing runner-up in the Super League last season but they could only muster a seventh-place finish with 14 points at the end of their 11-match fixture in the Covid-19 disrupted season.

Dollah, who guided Pahang to their third Malaysia Cup title in 2013, said he had a talk with the players over the fact they may end the season empty-handed for a second year in a row.

“I told the players that we have nothing left after our dismal show in the Super League and we need to do something in the Malaysia Cup, ” said Dollah.

“This is the only competition left this season and I believe we have the quality to gain a positive result.”

Dollah said the injury curse was the bane of the team this season as they were without key players for most of their matches.

Midfielder Adam Reed and wingers Faisal Halim and Zuhair Aizat picked up injuries in their final league game when they were beaten 2-1 by Terengganu two weeks ago.

“Everyone says Pahang are a strong team this season but honestly, with the injuries we had, it prevented us from a better finishing in the league, ” said Dollah.

“I believe we can perform better in the Malaysia Cup. Mickey (Faisal) is expected to start training next week and Reed is also trying hard to return to training.

“They are recovering but I think they will need a bit more time to be mentally ready.” 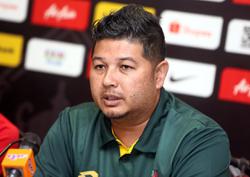