PARIS (Reuters) - Olympique de Marseille ended a four-match winless streak when they beat Girondins de Bordeaux 3-1 to move up to fifth in Ligue 1 with their first home win of the season on Saturday.

Florian Thauvin, Jordan Amavi and a Pablo own goal won the points and put OM on 12 from seven games, three off pacesetters Paris St Germain who won 4-0 at 10-man Nimes on Friday.

Bordeaux, who reduced the arrears through Josh Maja late on, are 10th on nine points after new signing Hatem Ben Arfa failed to make an impact on his debut for his sixth French club.

Marseille had drawn three and lost one since beating PSG at the Parc des Princes on Sept. 13 and Saturday's result is a welcome confidence boost ahead of the trip to Olympiakos Piraeus in their Champions League opener on Wednesday.

At the Stade Velodrome, Thauvin opened the scoring for Marseille with a splendid 25-metre strike into the top corner in the fifth minute.

However the winger missed a chance of doubling the tally nine minutes later when Benoit Costil parried his penalty after Jordan Amavi was brought down by Youssouf Sabaly.

Costil has now saved 16 of 53 penalties since the 2011-12 season, more than any other keeper in the top five European leagues.

Amavi doubled the OM tally nine minutes into the second half when he headed home Thauvin's free kick.

The full back's cross was then deflected by Bordeaux's Pablo into his own net in the 64th before Josh Maja pulled one back for the visitors six minutes from time.

Lille, who have 14 points, host neighbours RC Lens, with 13, on Sunday and if one of them wins the derby of the North they would move top, while a draw would leave PSG in pole position.

Stade Rennes are in second spot level on 15 points with PSG after being held to a 1-1 draw at bottom club Dijon on Friday. 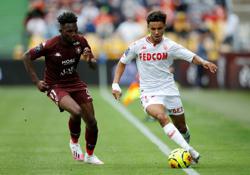 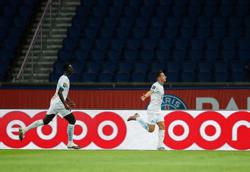 Five sent off as Marseille grab rare win at PSG