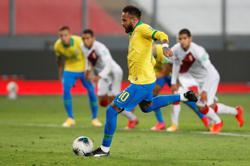 LIMA (Reuters) - Peru’s 4-2 loss to Brazil in the South American World Cup qualifiers was tainted by the referee’s "gross errors" and should be reviewed and corrected, Peruvian president Martin Vizcarra said on Wednesday.

The action-packed game at Lima’s National stadium on Tuesday evening was level until the last few minutes when Brazil scored two decisive goals.

The Brazilians won 4-2 with the help of two penalties, both converted by Neymar, and a stoppage-time fourth goal that came after Peruvian defender Carlos Zambrano was sent off for elbowing an opponent.

Vizcarra said he was felt angry and uneasy about the result and the decisions, which left Peru joint second bottom of the qualifying table after two games, with one point from a possible six.

"Unfortunately, I have to speak as a fan, as a citizen; the (Chilean) referee threw a finely poised game off balance,” Vizcarra told reporters after a cabinet meeting at the presidential palace.

"May FIFA, through its own internal measures, correct these resounding mistakes that affected the team, affected the fans and the whole country.

"We still have hopes of qualifying for the finals, (and we are) hoping that the gross errors that changed the game are not repeated in the future," Vizcarra added.

The top four in the 10-team group qualify automatically for the 2022 tournament in Qatar and the fifth-placed side go into an inter-regional playoff.

Peru qualified for the last World Cup in Russia in 2018, their first appearance in the global showpiece event since 1982.

(Reporting by Martin Aquino in Lima; writing by Andrew Downie in London, editing by Ed Osmond) 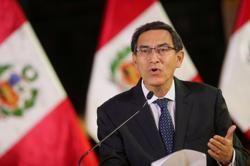